A personal view of mesothelioma by Rob Harper 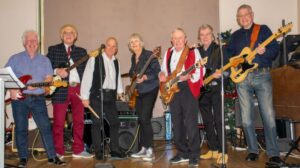 Rob’s band organised a fundraising concert for ASCE before Christmas and so far has raised £2,500 for our work. Rob is third from the right, and is wearing a red waistcoat. Some of the band were rocking concert venues back in the early 1960s but they and their fans have lost none of their youthful energy!

It seems many years ago now that I was asked by Doug Jewell, who was then the manager of Asbestos Support Central England (ASCE)), if the Clarion Choir would sing for Action Mesothelioma Day. Clarion have long been prepared to support and raise awareness of issues that affect working people and their families so they agreed to do all they could to support the event. The organisers were so pleased with the outcome that Clarion were invited back every year.

I myself had worked with asbestos

I had worked with asbestos as a young man before the dangers were officially known, so I was well aware of its immediate and potential dangers. I even wrote a song for Action Mesothelioma Day, which has been sung every year.

Earlier this year came the supreme irony. About three months after my brother died with mesothelioma, I too was diagnosed with the same disease. Lightning can strike twice!

The help I received has been phenomenal. I was contacted by ASCE and asked about my exposure to asbestos. For 12 years I had worked on and with asbestos, removing it from boilers and then mixing and replacing it to make the insulation good again. They helped me put together my work history and within two or three days I received a telephone call from the Department of Work & Pensions. I was soon told I would be placed on the maximum Industrial Injuries Disablement Benefit and would receive a lump sum payment. Initially I felt uncomfortable receiving this money but some five months later I realise that I need, and will be increasingly dependent upon it.

I am in the process of purchasing a bungalow as I know I will not be able to climb stairs in the near future. There are other issues. For instance, public transport is less accessible now, making me more dependent on my car and the use of taxis.

Since the initial practical help from ASCE I have joined one of their on-line support groups and made contact with specialist nurses. It is particularly helpful to me. I watched my brother die with mesothelioma so I have some idea of what is in store for me. To be able to share experiences with others who are suffering from the effects of asbestos and to receive specialist advice on all sorts of things from treatment to diet has allowed me to cope pretty well with my condition and not dwell too much on the future.

Knowing that ASCE is there means so much to me. I can turn to people who have expertise and experience in helping others who are in the same boat. They are wonderful!

Picture © Rob Harper and his Band

Posted in benefits and compensation, Support, surviving with an asbestos related disease, Uncategorised